My first real tool ever

Owning a so called obsolete thing like a typewriter brings up several problems (apart from the obviuos space limitation and strange looks from other people when they find out you have a dozen of typewriters, old computers or game consoles in your home). One of them is the trouble with getting replacement parts. For example, a tooth broke off from the daisywheel of my otherwise perfect WheelWriter during shipping, and I had to purchase a whole other machine just to get an intact writing element (you can get wheels on Ebay, but I needed a Hungarian one, and that's hard to get).
The other one is that sometimes you need to fix them and you need proper tools even for cleaning. That's another thing I'm short of. So I made my first step towards eliminating this issue by ordering a crank from Ebay. This is just a crank, you say, and you may be right. But this is a special tool made for IBM Selectrics and it allows you to hand-cycle the mechanism of the machine. The original tool got a knob at the end, so its official name was "Hand-cycle wheel", but that one is no longer produced. So this one is a custom made product I got for $12.70 plus shipping plus a little donation for the U.S. Marine Corps which is rewarded by a pretty sticker on the envelope which I like (this is a shame since now I'll never throw it away - okay, maybe I will. Eventually.).

I'm far from getting all the tools I need, but it's a good start, and more will follow.
Posted by Unknown at 19:00 2 comments:

When I found this beatuful Rheinmetall KsT for sale I knew nothing about Rheinmetall. Then, after asking fellow typewriter collectors* on the Yahoo TYPEWRITERS group, I decided to purchase it. People told me they are nice typers and they really are. It doesn't feel as solid as my Consul Portable, but doesn't weight that much either.

The company itself was founded in 1889 as Rheinische Metallwaaren- und Maschinenfabrik Aktiengesellschaft. Their main profile was manufacturing military products, but the terms of the Treaty of Versailles after World War I caused that they had to switch to more peaceful products like steam locomotives and office equipment. Military production was resumed later. After World War II the (remains of the) Sömmerda factory became a state-owned company in East Germany and they continued producing office equipments until they had failed to keep up with the changing circumstances so they had to stop production at the end of 1991.

When this machine first came into my attention, I was like "Oh, it's so sixties!". The serial number can be found next to the right-side ribbon spool under the cover. It says 529942 which means it's made in 1960 according to Typewriter Database. On the same website one can see that Model KsTs were produced since 1945. I haven't found any information about whether they changed the shape of the housing during the production period (apart from changing the position of the ribbon color selector), but apparently I was wrong when I thought it's an original 60s' design.

I got the machine a few days ago. It was in great condition, all I had to do was some cleaning. At first the Tab key was not working, but I guess it hadn't been used for years, since pressing that several times freed it up and it's fine since then.

The Tab Set/Clear lever is positioned on the left side of the carriage which is a little bit incovinient placement, but I'm pretty sure it doesn't really matter on a portable. As I was playing with it, I realized that it did not always stop at the same location, but for most of the time it worked pretty well. Maybe I hadn't hold down the Tab key long enough the first time?

Unlike my Olympia Splendid 99, this Rheinmetall has its carriage lock lever put to a pretty straightforward position, so it haven't took me long minutes to find it.

It can't be seen on the pictures, but the left paper holder misses its spring. He's not alone: I miss it too. So sad it's gone. The keys are easy to touch, so I really like typing on this one. Actually this machine made me start practicing touch typing on a manual typewriter for the first time in my life. Our school had electronic machines, so I haven't really tried typing more than a few words on a manual till today. Like most portables, it has carriage shift.

I noticed an interesting thing about the ribbon placement. Unlike my other machines, this Rheinmetall's ribbon cover leans under the actual level of the ribbon. This means you can reach the ribbon reversers without taking off the cover. It also means that eventually your ribbon cover can get some ink on it. I guess one reason for this decision could have been the intention to have a rounded cover which I really like and makes this olive (greenish-grayish, depending on the external light) machine nice.

It came with a wooden case, some brushes and a cleaning cloth, but without the plants. Those came separately from the machine.

* I guess this is the first time I call myself a collector in public. Once you get in touch with these beauties, you can't resist anymore. Sigh.
Posted by Unknown at 17:17 10 comments:

Over 50 and still attractive: Groma Kolibri

I have seen the great German movie The Lives of Others a few years ago which gave an important role to a Kolibri portable typewriter in the story. One of my old dreams came true when I recently found and purchased a beautiful black Groma Kolibri. 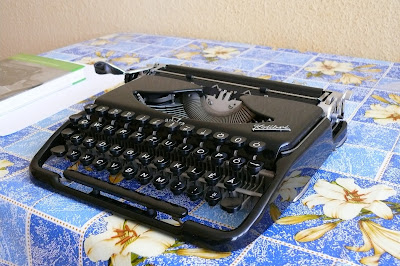 Groma produced these machines from 1955 to 1962 and they were available in many different colors. I'm lucky with this black, since it's pretty elegant with no doubt. Mine has the serial number 561 568 on the bottom. I think it's made before 1959 and I can be correct if we assume the numbers were increasing as the time went by and also accept that the Kolibri on the Netherlandish Schrijfmachinist site is made in 1959 with the serial number 632 950 which is definetly larger than mine. There's no guarantee I'm correct of course: very little information is available on this. 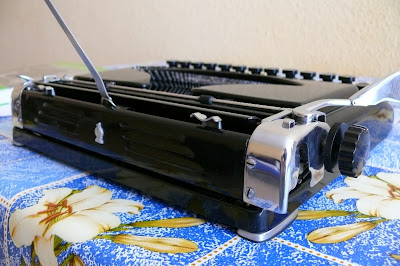 Just like my Brother Deluxe, it weights 4 kg but it's smaller at the same time. Its height is only 6.5 cm which is quite impressive. Just compare the size to this standard 9V battery: 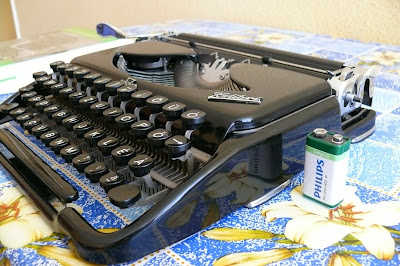 The machine is neither too large horizontally: 29 cm x 28 cm. It worths a note that in The Lives of Others there's a writing analyzer expert who states that these machines are 19.5 cm x 9 cm x 19.5 cm large which sounds good, but in reality, it would be incovinient to type on such a small typewriter. 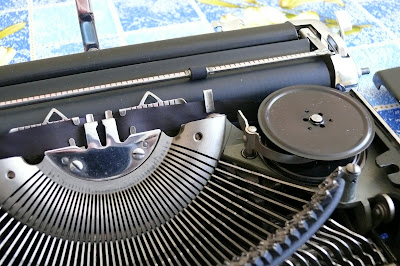 It was interesting to notice that one of the two ribbon spools is made of metal. Too bad that my machine misses the right-side platen knob (otherwise it's in great condition, as you can tell from the pictures). I was thinking about getting another, not-so-good-looking Kolibri and use the knob from there, but the only Kolibris I found at this moment were quite expensive: one of them is on an auction site with 4900 Ft starting price and another one for 10000 Ft ($21 and $43, respectively). The first one is in pretty bad condition even from judging by the pictures so it doesn't worth the price ($20 just for the knob is not a good deal), the second one looks too nice to get the knob off from it, moreover it has a German keyboard layout which I don't really like, so it's not good to have it as a typewriter either. And hey, it's not a computer to be able to install a new charset! And both of them are green. After some time I also realized that the knob is colored to the same color as the machine so green machines have green knob, etc. I think it will take a very long time to see any black Kolibris again, if I ever meet one of these beauties in the future. 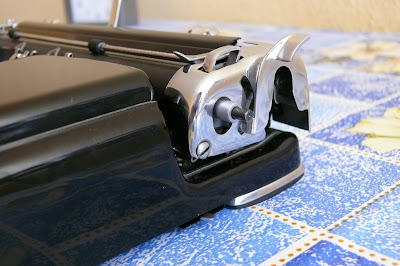 Under the missing knob, just below the machine you'll find a little lever. These machines don't reverse automatically the direction of the ribbon when you reach the end of a spool so you have to do that manually by using this switch.

Did I show a closeup of the logo on the cover? No? How could I not have inserted this picture right at the beginning of this post? 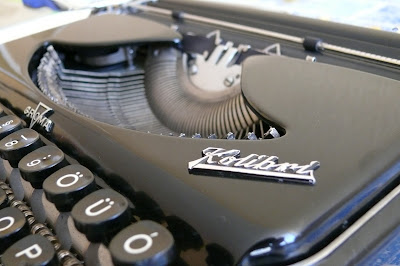 I'm glad to have this beautiful and well-built typewriter in my collection (can you call a group of three typewriters a collection?). Finally, just because red and black looks great next to each other, here's a photo featuring my Brother Deluxe 220 and Groma Kolibri together: 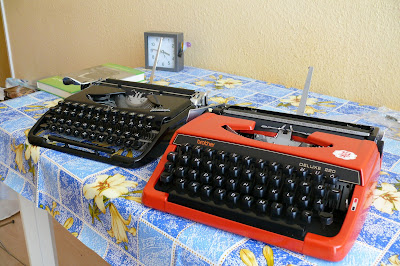 A portable one: Brother Deluxe 220

Firstly, welcome to my blog, glad to see you here! Since I'm in love with everything which has keys or buttons on it as long as it looks cool and/or retro enough I decided to start a blog about them.

This includes typewriters, calculators and computers. It's obvious that collecting these things are not cheap, and I'm pretty short of money recently, but still have a few gadgets I plan to show you.

So, here we are with the first: a Brother Deluxe 220 typewriter I got from an auction site last summer for a few thousand Forints. I can't recall the exact amount, but it's equivalent to $10-$20, if you prefer.

It comes with a black plastic case which converts your thing to a small suitcase when you attach it to the typewriter to allow carrying this 4 kg machine with you. The case looks pretty ugly, I'm not sure if I ever can clean it, but the machine itself was almost in perfect conditioin. And it's red!

Yesterday I took the time and cleaned the machine a little. This is how it looks like:

I'm not sure when this machine is made, but there's a sticker on it which says "10 million Brother typewriters: 1961-1980" which means it's made after 1980, so it may happen that it's younger than me :) Robert Messenger features a black Brother Deluxe 220 on his oz.Typewriter blog, which has a serial number beginning with H. However, his machine has no "10 million" sticker on it. What his machine has while mine doesn't: a label which says: "Made in Japan". I have a "Made in Japan" title inside the plastic case though, but I'm not entirely sure whether it refers to the case only or both the machine and the case.

You can see the "10 million" sticker on the picture above. You may also notice that this has a Hungarian keyboard, which is perfect for me since I'm Hungarian. However, as it was common in that time: it has no 0 or 1 numbers on it. My mother had an Optima when I was little, and that also had no 0/1 numbers on it even though that was not a portable typewriter at all. Typists used small L instead of 1 since it looked pretty similar, and small O instead of 0 for the same reason. So the number 1500 would have looked like l5oo for instance.

Because of the portable design the height of the typewriter is pretty low (around 10 cm). This means there's no place to lower the segment when pressing Shift. It lifts the whole carriage instead. 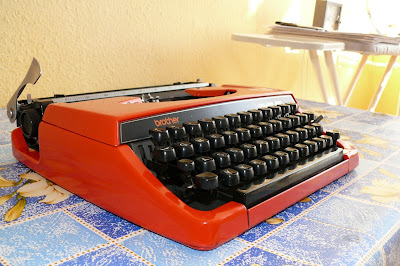 When carrying, you can lower the carriage return lever and there's a latch on the right which keeps the carriage from sliding to the right.

I'm pretty satisfied with this little beauty, however I must admit I miss my 1 and 0, not like it was a flaw or anything.

Hope to see you soon with more beautifully made gadget.
Posted by Unknown at 11:59 6 comments: